This is a landing page for ongoing research work that attempts to model History-Centric Thought Systems (HCTS), the nature of its membership and how it is likely to interact with thought systems that are not history-centric, as well as its impact on cultural diversity.

This is not a finished work of research. We are just getting warmed up! Comments, criticism, corrections welcome. Suggestions on how to take this analysis forward meaningfully (without getting too sidetracked into abstract modeling) would be appreciated.


History-Centrism is one of many key terms introduced by Rajiv Malhotra in his powerful new book 'Being Different' to counter claims of Western universalism by 'reversing the gaze' and analyzing their thought system based on a Dharmic (Indian) framework. Judeo-Christianity is an instance of a membership that subscribes to a HCTS in contrast with Indic schools of philosophy that focus on the inner sciences and are non-dual in nature.

1. Necessary/Sufficient Conditions for History-Centric membership
Stipulates the requirements for becoming a member of a HCTS or get disqualified using the concept of a historical prior. It follows from this formulation that HC implies duality (i.e. with mathematical certainty).

2. Impact of HC belief and duality on stability of HC membership
We analyze the stability of membership of a HCTS and show the stable equilibrium will probably never be reached if a unique non-reproducible prior belief drives the HCTS, i.e., it creates a "proselytize or perish" response to a chronic and self-induced existential question, even in the absence of any local competition.


3. Game-Theoretic analysis of History-centric conflicts & comparison with non-dual groups
Part-A: We differentiate between active and passive duality and attempt a game-theoretic analysis of the nature of resultant conflict between:
- two rival HCTS
- HCTS and non-HCTS
- two non-dual thought systems
and classify them accordingly. The results can provide insight on the response that can be adopted by a non-HCTS to survive in such contests that often tend to be characterized by asymmetric or one-sided payoffs.
Part-B: we study the decision choices available to the participants in such contexts and examine three cases.

4. History-Centrism and Monoculture: How HCTS has motivated the creation of a global master narrative of Western universalism that is the dominant contemporary monoculture. We look at examples of how the reductionism and digestion that characterize a monoculture can suffocate diversity and diminish the authenticity of experience.

Note: The material below has been added after this new model based on History-Centrism was first featured on Rajiv Malhotra's 'Being Different' book website.

5. Contradiction Networks: On how a HCTS model that is subjected to sustained scientific examination over a period of time is characterized by a maze ('network') of contradictions. The management of the HCTS spends more time trying to manage these chains/circuits of contradictions rather than eliminate it's logical source.

6. Duality masquerading as Advaita : As the HCTS model attempts to manage, rather than eliminate its inherent contradictions, it is forced to appropriate useful metaphysical as well as practical self-improvement methods from Dharmic Thought Systems to re-brand itself and project a new image.

7. A programmable model of the History-Centric soul: Unlike the Dharmic Atman, the HC soul is finite, time-limited, bounded, deterministic, and programmable, and also extremely unforgiving by design. The binary end-state / output of this model is only controllable by a third-party owner and depends purely on the keying in of a collectively valid and static input password / coupon rooted in history-centrism. The fear psychosis induced by such a design is arguably the biggest reason why many followers of HC faiths (e.g. Abrahamic religions) tend to relinquish membership after a while, and also why aggressive conversions continue to occur.

8. History Centrism in Western Mathematics: Mainstream western math and science is characterized by a relative over-reliance of historical reputation driven theorems and laws that were themselves based on axiomatic mathematical truth claims rooted in theology. In contrast, Dharmic systems focus on the empirical approach that allows one to re-experience the first discovery via first principles. Rather than rely solely on metaphysical truth, DTS recognizes a pluralism of analytical approaches to the same physical problem, and that a model representation may never be perfect and it is practically useful to not obsess about the unrepresentable that is not relevant to a given context. In the modern world of computing, internet, and artificial intelligence, the DTS based approach is proving its practical efficacy over abstract deductive methods that provide little real-world insight.

9. Yoga: Freedom from History. An attempt to understand the ideas behind Chapter 2 of the book"Being Different". Being history-centric is to be held hostage to some ancient historical prior that can never be authenticated. A double whammy effect of being history-centric is that any scope for salvation is possible only in the infinitely distant future beyond this life and cosmos. Consequently, such a person is unable to live in the present since the keys to happiness are tied to the past and the future, but never the current moment. 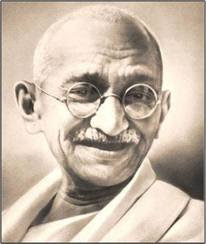 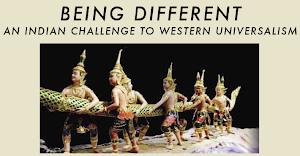 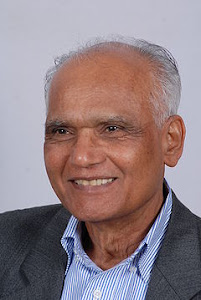 "This is the kind of scholar I have hoped to discover through my
writings and inspire. He has immersed himself into the history centrism thesis,
then emerged with his own creative manthana based on it. He proposes novel ways of looking at it. All the blogs listed on the right margin are the product of original hard work and worth reading. My thanks go to him"